This track is a stretched version of a shorter recording. A radio broadcast phases between obscurity and clarity.

This track is provided as recorded. No clear broadcast is heard.

The tracks can be streamed on the itch hosted version of this page, itch.io/twisted-wire

This text aims to provide some context and thoughts regarding the files submitted with this work. The files are audio recordings.

I'm working on some research that I'm describing as a Luddite archeological examination of an IoT development board and the modes of hobbyist practice that they facilitate. ⁠ (Footnote: You can find out more about this at bruise.in where a version of this page is also posted. )

I want to understand more about the processes and systems that produce the kind of boards I've been using in different parts of my practice for several years now.

The small scale and relative simplicity of the boards makes them practical for working with groups of people who might not have much technical/coding experience.

Finding techniques or practices that build understanding and expose flexibility, reveal the malleability of systems, is useful in the context of Luddite dismantlings.

This text is probably going to feel disjointed and unfinished. I'm trying to describe parts of the process of making these sounds and the reasons for making them. This isn't intended to be a detailed tutorial or guide - I will link, instead, to those.

The sources I used here were prompted by fellow lurk.org member @rose_alibi reporting on their own receiver building. They pointed to this guide by Shortwave Collective (who describe themselves as 'an international feminist group using the radio spectrum as artistic material'. So feel free to skip straight to their materials.

Perhaps I can justify the use of radio in the drone jam by way of suggesting that the lossy-radio-wave is a proto-drone. In the jam discord @Adrien and @Kristian described the initial theories or steps toward making an 'interesting' sound or drone. They discussed the approaches of additive synthesis, combining sine waves with different frequencies and also subtractive synthesis, beginning with a set of waves and shaping the sound by removing. These processes are repeated following mathematical principles or simply listening and selection - a gradual process of building a drone. My use of the radio is like the subtractive method. The radio signals sent from a station, travel on a carrier wave. ⁠ (Footnote: The AM in AM Radio stands for Amplitude Modulation. This describes the way the message is impressed upon the carrier wave; "the amplitude (signal strength) of the wave is varied in proportion to that of the message signal, such as an audio signal" (wikipedia) ) The receiver attempts to parse the carrier wave, revealing in its deviations the broadcast signal.

In this way, it is perhaps possible to explore the drone-like qualities that are the result of the combination of radio waves, a simple receiver and an inquisitive, restless operator.

I participate in a sprawl of networks, and am fascinated with the communities they build. A general attempt at refusal of participation in the larger platforms leads to fruitful lurking across the federated spaces of Mastodon, a gaggle of Discord servers and occassional visits to tilde servers and gemini capsules.

I noticed the post about these receivers by chance. The activity of Lurking in these spaces is a lot like receiving radio. It is opening a channel and listening for a while.

The design of these sets was simple enough that soldiers in WWII could piece together a set from pieces found in their kits and battlefield detritus. They were the low-tech cousins of the crystal set radio which had been invented only a couple of decades earlier. ⁠ (Footnote: re military tech development... the thing that everyone knows but we find hard to think through the implications - that the web was a military tool; the reason folks have to specify in their licences that their thing won't be used by military or police; the insistence that harmful technologies (including surveillance, drone, robotics) are normalised through distraction - i.e. calling the algorithmic mobile sentry post a dog. The story of the foxhole radios is presented often as the product of bootstrap 'GI ingenuity' [look up Radio Craft 1944 magazine], one of 'the war's wonderful gadgets.' But this cheery reading can be met with an alternative, in considering the act of listening - the need to listen, to receive a signal, outside of the military - a loose signal. It imagines a different way. ) ⁠ (Footnote: the obvious link, is of course the drone itself. The severed eye. There Will Be No More Night is a good reference for thinking through this. )

The set up of the circuit is astounding - there are no chips, no computation, no power. The set relies only on the energy of the radio waves in the air.

These AM waves have a very low frequency but are on a spectrum that includes the electromagnetic waves used in Wifi communications.

I think about drones, about this network, the jam, the passing conversations and strands of information. Something forms around these ideas - the shared goal of making a thing.

There is a step - perhaps the most important step of the process, in which you must wind the magnet wire around a tube, 120 times. ⁠ (Footnote: The specific number is consistent from the earliest reports. In my own fumbling attempts I didn't find much difference in adjusting this slightly. )

It feels like prayer - the transit of beads along a string, each thought confined neatly between silently mouthed numbers and the twist of the tube. I make it prayer. I think about the winding, the assembly of a machine.

As I repeat this process several times during the week, I am grateful each time by the stillness it affords. I wind coils around different sized tubes at different lengths, and even a round stone from my garden (taken from a beach, long ago).

Another part of the circuit that exposes the geological materialities at play is the creation of the diode, also called the cat's whisker. This component allows the current to move in only one direction. By applying this to the radio wave that has been induced by the coil, the signal is parsed. The current passes through a safety pin, through the graphite core of a pencil and across the blued surface of the razor blade.

This unlikely assembly of objects reveals and transforms media latent within the air. 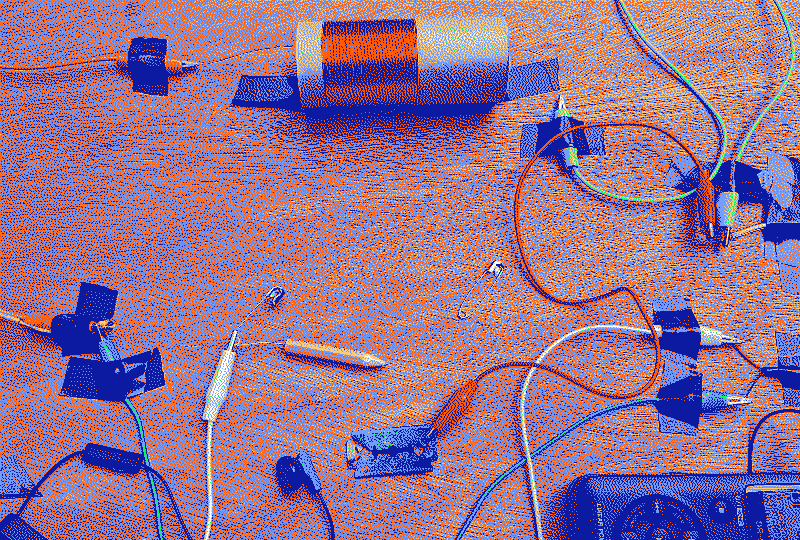 I sit with the set into the night, listening to the only station I seem to reliably catch and exploring the noise that blankets the remainder of the coil. Other noises creep in. Clicks and hums.

The antenna is hanging around the roof beams and out of a window. It moves restlessly like a cats tail in the night air, a soft scratch along the slate.

I'm unsure how to share what I've found. I expect the most important part was probably simply doing it, performing the construction and operation of the set, in concert with the other participants of the jam, each following their own concerns and investigations. ⁠ (Footnote: I attended one of the co-working sessions and was amazed at the discussion and diversity of responses to the jam format. I failed to operate the software and share my own progress which intruded on the dynamic but which our hosts smoothed over gracefully. )

I scrub through the accumulated recordings. The recordings are perhaps best only as proof of the listening. They feel mediated and cold. I add reverb, a limiter and paulstretch in Audacity. These take off some of the harshness captured in the recording and push the sound back towards an unfamiliarity and strangeness that feels in some ways closer to the experience of searching with the needle for the shape of a wave.

Later in the week I begin modifying my approach to work against the broadcast signals and listen to the edges of sounds. I experiment with adding resistors into the circuit. One variation of this filters the signal to a quiet stream, revealing new contours, twists and patterns. There are waves of sound. Warm rushes. It is beach surf - close and entirely unconcerned by my presence.

The listening (and recording of the listening) consitutes a performance, and act of collaborative composition. @leebot shared links to John Cage's composition for radios - and I'm also reminded of Holger Czukay's habit of instrumentalising the local radio. I'm interested in a technology of play. We fall into habits of conformity with our present-day 'war gadgets' often performing just the operations required to continue the cycles of extraction. Of course, in this experiment we have only ⁠ (Footnote: Only... How quick and easy it is to equate the experienced to the easy. It is incredible. It reveals a world, a whole magnitude of being that sits just outside of our natural perception. ) been attempting to receive radio. The act of transmission is integral to the history of cultural collectives, DIY and hobbyist actions, acts of resistance and refusal.

Here, we listen with rocks.
We listen with waste material.
We listen with laced wires - an intentional entanglement with our habitat -
a careful spreading -
as the operator we ar epart of the circuit (through my own erroneous setup, I am often connected at several points, the signals passing through my fingertips.
Refusal through refuse.
Thinking about Agnes Varda's The Gleaners and I.
Sometimes things take so long to fall into place.

This also reveals something of the locality, and the needs of communities that you perhaps aren't entirely a part of. Throughout the week the only station I receive clearly is BBC Asian Network. The network was started in the city in 1989, before becoming a national network in 1999. The station is no longer based in here. It is available anywhere online, but is only broadcast on medium wave in the Midlands. The tower that is transmitting is in fact within a couple of miles to my antenna. Two pieces of news that I'm aware of this week: 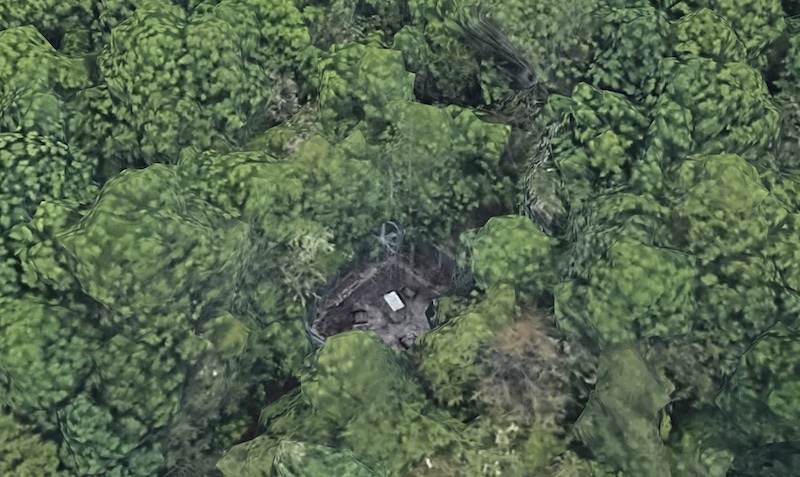 Radio, like other low-energy long range networking techniques are often discussed along lines of post-disaster, survival efforts. They are a prepper's tool. I'm more interested in the networks they can build now, mid-disaster(?). What different practices of listening can be found in scanning the air? Like the efforts of the Shortwave Collective demonstrate - there is much to gain from acting now. There is everything to gain, in fact.

Build a receiver now - and build it incorrectly, with mistakes and modifications. It is probably fragile and responsive to careful interactions.

A teacher in primary school told me the only joke I ever remembered:
⁠ ⁠ ⁠ - How do you make a wireless?
⁠⁠ ⁠ ⁠ ⁠ ⁠ - Get six wires, take one away.

dr((((((o))))))ne jam, is organised by "Marie LeBlanc Flanagan with support and thanks to Ida Toft, Illest Preacha, Gaeel and wyrd arts, a community of artists, musicians, and community organizers in canada who are excited about experimental creative expression."

The footnote script is borrowed from James R Meyer's Easy Footnotes for Web Pages. This is a lightweight, easy to implement format that focuses on accessibility.